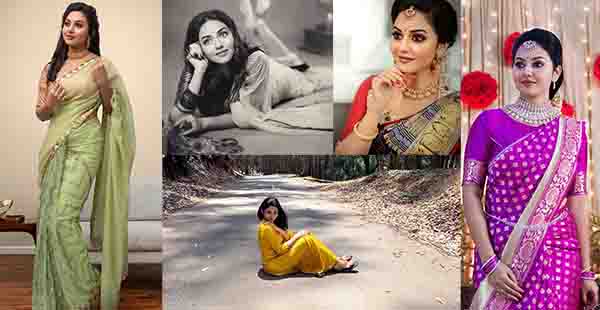 Vidya Pradeep is an actress, model who predominantly appears in South Indian movies. She is a research scientist by profession and actress by her interest.

Vidya Gopakumar was born on April 13, 1990, at Alappuzha, Kerala for a father who worked as an officer in the Indian Army. She was raised in Chennai and completed her Ph.D. in Stem Cell Biology and worked as a research scientist in an eye hospital.

She started to practice Bharathanaatiyam during her childhood and started her modeling during her career. She also did part-time television advertisements during her college. While Vidya Pradeep appeared in A.R. Rahman’s music video, She was noticed by Tamil cinema celebrities and helped to make her Tamil debut in the movie “Aval Per Thamizharasi” in 2010 with Jai in a supporting role named Dhayana.

The same year, she signed to the movie “Virunthali” as the lead role. It doesn’t go well for her. After 4 years, she got an opportunity from director A.L.Vijay for a supporting role for the movie “Saivam”. She also appeared in Tamil movie “Adhibar” starring Jeevan and then Pasanga 2 as a supporting role in 2015. She utilizes her opportunities and made her Kannada movie debut in 2017 in the movie “Bangara s/o Bangarada Manushya”.

She has done lead as well as supporting roles in the following movies:

To be frank, Again Vidya’s movie career doesn’t go well for a while. So, she stepped in Tamil serials and made her debut in the Tamil serial “Nayagi” (A successful serial in Sun Tv).
In 2019, she appeared in the movie “Thadam ” as a supporting role and her performance in this movie gives her a great comeback. She discontinued the Nayagi serial due to her tight schedule and again stepped into cinemas more strongly. Othaiku Othai, Asurakalam, Thalavi are her upcoming movies in this year (2020).

Vidya Pradeep’s relationship status is single and unmarried. She lives with her parents in Chennai, Tamil Nadu