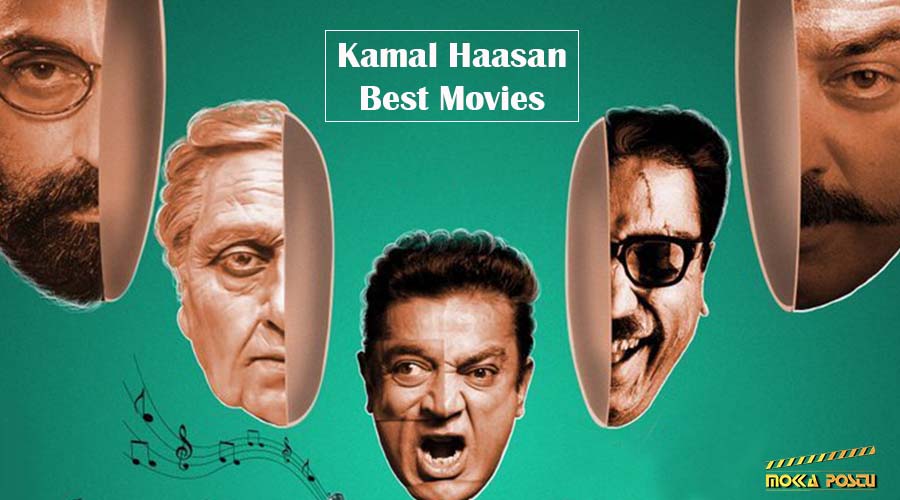 I think we don’t need much introduction about Padma Shree Kamal Hassan because he is a popular multi-talented artist in Kollywood cinema. He started his career as a child artist in 1960 and has done over 150+ movies in Tamil. Kamal Haasan is one of the few actors who has done a variety of characters on screen. Among these 150+ Kamal movies, we have picked the top 15 Kamal Haasan movies you must watch if you haven’t seen before.

Japanil Kalyanaraman is a Tamil comedy movie where Kamal Haasan appears in a dual role as a hero and spirit. Radha plays the female lead role. The movie was directed by S. P. Muthuraman under the P. A. Art Productions. The movie was released in 1985 and got mixed reviews. The movie is about a journalist who exposes the details of smugglers and travels to Japan with his son and spirit for further printing works.
Music: Ilaiyaraaja     Running Time: 2 hrs 10 mins     Cinematographer: T. S. Vinayagam     Editor:  R. Vittal, C. Lancy
Best Songs of Japanil Kalyanaraman: Radhe En Radhe, Chinna Poo

Thevar Magan is a village-based story directed by Bharathan under the banner “Raaj Kamal Films International”. The top performers were Sivaji Ganesan, Kamal Haasan, Revathi, and Gautami and Nassar. The movie was released in 1992 and was a commercial success. “Inji Idupazhagi ”, favorite song for many takes place in this movie. Thevar Magan is a story of father and son who works hard for their villager’s protection and development.
Music: Ilaiyaraaja     Running Time: 2 hrs 38 mins     Cinematographer: P. C. Sriram     Editor: B. Lenin, V. T. Vijayan
Best Songs of Thevar Magan: Inji Idupazhagi, Potri Paadadi Penne

‘Indian’ is one of the remarkable movies in Kamal Haasan’s career. It is a kind of social awareness movie acted by Kamal Haasan, Manisha Koirala, Urmila Matondkar, Sukanya, and Kasthuri in lead roles. Kamal Haasan appeared in both father and son roles. The movie was directed by Shankar under A.M. Mani Ratnam’s production house ‘Sri Surya Movies’ and released in 1996. This movie places awareness against corruption in India. Now, the process is going for the release of ‘Indian-2’.
Music: A. R. Rahman     Running Time: 3 hrs 05 mins     Cinematographer: Jeeva     Editor: B. Lenin, V. T. Vijayan
Best Songs of Indian: Pachai Kiligal, Telephone Manipol

Kamal Haasan is the only actor after Sivaji Ganeshan (9 Different Characters) who has appeared in ten different characters in the same movie. He creates this record through the movie ‘Dasavatharam’ under the direction of K. S. Ravikumar. Aascar Film Pvt. Ltd produced the movie and released it in 2008. Asin and Mallika Sherawat as female leads. This is a science fiction movie that exposes the story of Bio-weapon.
Music: Himesh Reshammiya & DSP     Running Time: 3 hrs 05 mins    Cinematographer: Ravi Varman     Editor: K. Thanikachalam
Best Songs of Dasavatharam: Ulaga Nayagan, Mukundha Mukundha