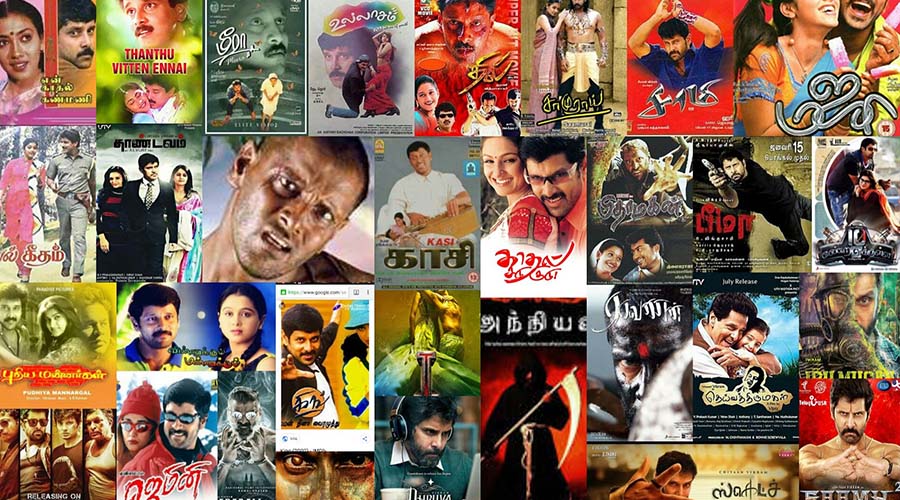 Vikram is an underrated as well as most talented actor in Tamil Cinema. Added to that, he is the only actor with Zero haters and entitled with ‘Chiyaan Vikram’. He started his career in the movie ‘En Kadhal Kanmani’ and into the cinema field over 30 years. He has almost done 60 movies and most films are successful. From every perspective we have viewed those 60 movies and listed the top 15 Vikram movies for you.

Bala made his directorial debut in the movie ‘Sethu’ with the stars Vikram and Abitha in lead roles. The movie was produced by A. Kandasamy and released in 1999. Sethu, one of the best romantic movies in Tamil becomes a breakthrough movie in Vikram’s career. This movie is based on the real story of director Bala’s friend who became mentally ill after the death of his lover.
Music: Ilaiyaraaja Running Time: 2 hrs 10 mins  Cinematographer: R. Rathnavelu  Editor: Raghu Babu Best Songs of Sethu: Gaana Karunkuyile, Maalai En Vethanai

Dhill is an action movie directed by Dharani under the banner ‘Lakshmi Productions’. The film features Vikram and Laila as lead where Ashish Vidyarthi, Nassar, and Vivek in supporting roles. The movie was released in 2001 and hitbox office. Dhill is a story of a common man Who dreamt to be a police officer but his path changed because of a corrupt police officer.
Music: Vidyasagar Running Time: 2 hrs 38 mins  Cinematographer: Gopinath  Editor: B. Lenin & V. T. Vijayan Best Songs of Dhill: Un Samayal Arayil, Machan Meesa

The famous actress Kiran Rathod made her Tamil debut in the movie “Gemini” after Hindi, Telugu, and Malayalam debut. Vikram plays the title role alongside Murali, Kalabhavan Mani, Vinu Chakravarthy, Manorama, Thennavan are in other roles. The action movie was directed by Saran under the banner ‘AVM Productions’ and released in 2002. Gemini is an emerging don in a city and gives up his work because of love. But, Singaperumal (A corrupt police officer) pulls him to be again as Don for Kickbacks.
Music: Bharadwaj Running Time: 2 hrs 37 mins  Cinematographer: A. Venkatesh  Editor: Suresh Urs Best Songs of Gemini: Penn Oruthi, Deewana

Pithamagan is Vikram’s 4th commercial success movie after the hits of Dhool, Kadhal Sadugudu, and Saamy in 2003. Pithamagan was directed by Bala. The film features Vikram, Suriya, Sangeetha, and Laila as lead under the production of V. A. Durai. The story narrates the story between two friends Chithan (Vikram) and Sakthi (Suriya), Jailmates. Vikram and Suriya share equal screens in this movie, so it is also considered as one of the Suriya Best Movies.
Music: Ilaiyaraaja  Running Time: 2 hrs 38 mins  Cinematographer: Balasubrahmanyam  Editor: Suresh Urs Best Songs of Pithamagan: Elangaathu Veesudhey, Aruna Runaam

Arul is an action drama movie released in 2004. The movie was directed by Hari under the producers T. Rama Rao and T. Ajay Kumar. The film features Vikram, Jyothika in lead roles along with Pasupathy, Kollam Thulasi, and Vadivelu in supporting roles. In this movie, Arul (Vikram) is a kind-hearted and helpful person for the public but his father thinks him as useless.
Music: Harris Jayaraj  Running Time: 2 hrs 43 mins  Cinematographer: Priyan  Editor: V. T. Vijayan Best Songs of Arul: Ottiyanam Senju Tharen, Punnakkunu Sonnakuda Kavala Illada

Vikram and Director Shankar join for the second time in the movie ‘I’. It is an action thriller movie along with some Scientific facts. I was produced by Aascar Film and released in 2015 with stars  Vikram, Amy Jackson, Suresh Gopi, Santhanam, Upen Patel, Ojas Rajani, and Ramkumar Ganesan on screens. I define the betrayal of Lingesan (Vikram) by his competitors in the industry with the use of H4N2 influenza.
Music: A. R. Rahman Running Time: 3 hrs 08 mins  Cinematographer: P. C. Sreeram  Editor: Anthony Best Songs of I: Ennodu Nee Irundhal, Pookkalae Sattru Oyivedungal