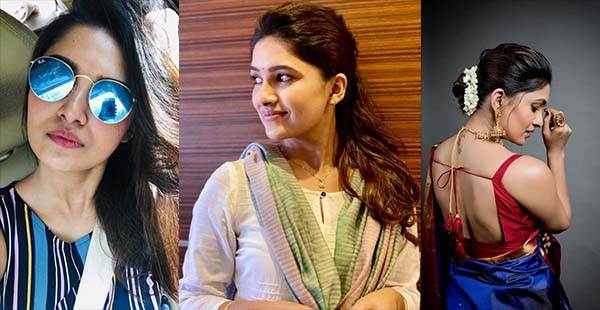 Vani Bhojan is a serial actress turned cinema actress who gives tough to the top actresses in Tamil. She is also a banner model and air hostess. She has done more than 150 advertisements as a brand ambassador.

She was born on 28th December 1988 ( 31 years as of now) at Ooty, TamilNadu for a wildlife photographer. She grew up in Ooty and completed her schooling in Boarding School, Ooty. Then a Bachelors’s degree in English literature at Government Arts College, Stone House Hill, Ooty.

After her studies, she worked as a Hostess as well as a model and moved to Chennai. In 2012, She got a chance in the Tamil serial and made her debut in the serial “Aaha” telecasted on Vijay Tv. The first two serials don’t give her much popularity.
Then, She joined with Krishna on Sun Tv for the serial “Deivamagal” which is one of the most people watching serials in Tamil. This serial gives her brand name as “Deivamagal Sathya”. On other hand, she did the lead role in “Lakshmi Vanthachu ” telecasted on zee Tamil. These two serials gave her popularity to the peak. She is the highest paying Tamil serial actress and role model for every serial actress.
After success in the small screen, she stepped into cinemas and made her debut in the Telugu film “Meeku Mathrame Chepta”. Her Tamil debut “Oh My Kadavule” with Ashok Selvan takes her career into the next level.

She has a father, mother, and one elder brother. She is unmarried.