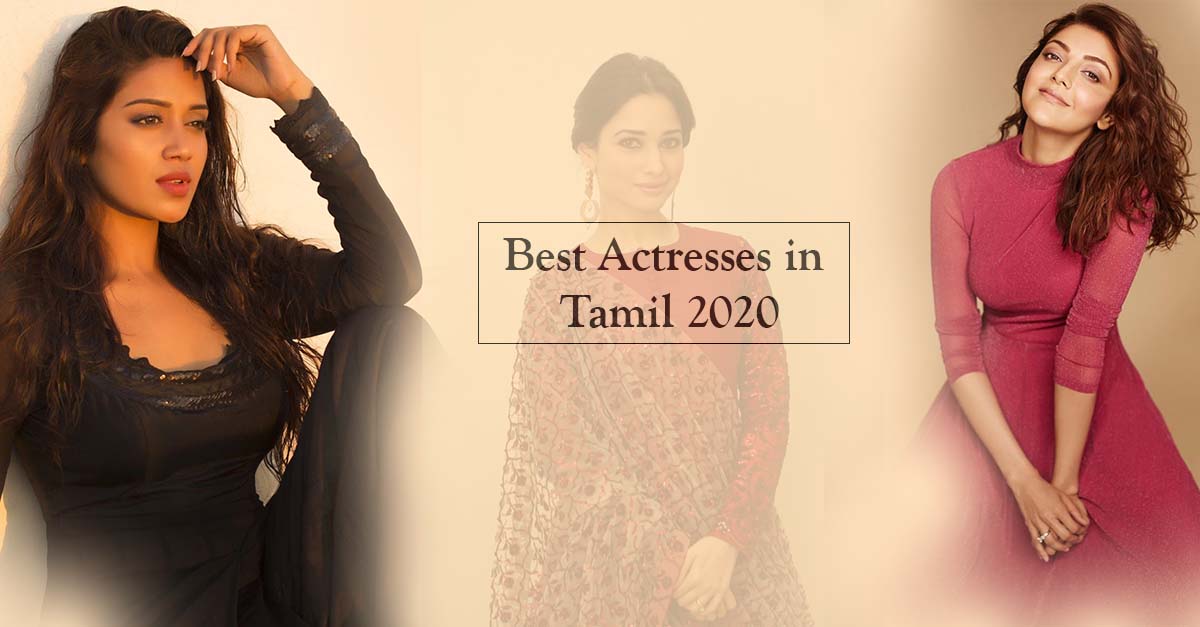 Nivetha Pethuraj is a dusky queen who made her debut in the movie “Oru Naal Koothu” with Attakathi Dinesh. After the first movie hit, she signed various Tamil movies. Her performance in the science fiction movie “Tik Tik Tik” added the best feedback about her. She showcased that she is also suitable for village characters other than modern characters from the movie “Sangatamizhan” starring Vijay Sethupathi. She made a strong basement in South Indian Cinema.

Rakul Preet singh is a dazzling actress who turned to actress from model. She made her Tamil debut in the movie “Thadaiyara Thaakka” starring Arun Vijay. Her performance in “Theeran Adhigaram Ondru” was her turning point in Tamil cinema. She is also appearing in the most anticipated movie “Indian 2” directed by Shankar. She also acted under the famous directors like A.R. Murugados, Selvaraghavan etc..,

Kajal Aggarwal is the gorgeous tamil actress who made her tamil debut in the movie “Bommalattam” with Arjun. Later, she made huge projects with the lead actors in Tamil and became a contributor in box office movies. There is a special audience for her eyes. She Joined with Thalapathy Vijay in 3 movies and one time with Thala Ajith. After long break in Tamil, recently she appeared in the movie “Comali” with Jayam ravi

Trisha is the evergreen actress who has lasted over decades in the Tamil Cinema. She made her debut in the movie “Mouna Pesiyathey” with Suriya and gave continuous hits. She has almost done movies with all the lead actors and directors in Tamil cinema. “Vinnaithaandi Varuvaaya” with STR makes her career forward. She is the ambassador of “Peta” which is to help pet animals. “96” has given her a great comeback in recent years.

Aishwarya Rajesh steals the young hearts through her performance and dusky skin. At the initial stage, she appeared on television. After winning in the reality show “Maanada Mayilada” she made her debut in the movie “Neethana Avan” with Attakathi Dinesh. She has done various roles in Tamil cinema as lead roles and also supporting roles. She has done a bold role in the movie “Kanaa” and made her career strong.

Keerthy Suresh is well known for her expressions. She made her debut in the movie “Idhu Enna Mayan” directed by A.L. Vijay. She played the best role as actress Savithiri in the movie “Mahanati” which is a biopic of actress Savithiri and won the national award. Her father is a producer and her mother is an actress. Rajini Murugan becomes the turning point in her career and she joins the hands with Thalapathy Vijay in the movie “Bairava” and “Sarkar”.

Without any doubt, Tamannaah is the dream girl for every youth. She made her tamil debut in the movie “Kedi”. Siruthai plays a major role in her career growth. Later she did many films with good stories like Ayan, Paiyaa, Veeram, Darmadurai, Devi, etc.., then after she appeared in Bahubali as everyone knows, one of the most iconic movies in Indian cinema. Tamannaah is still hungry to deliver the best movies to her fans.

Samantha is one of the best actresses in Tamil who has a huge fan base. She made her Tamil debut in the movie “Neethaane En Ponvasantham” and reached her audience through her performance. “Naan E” helps to move a step forward in her cinema career. After that, she signed multiple good projects with lead actors and became one of the leading actresses. She also initiated Pratyusha Support to provide medical services to women and children.

Nayanthara is well known for her performance who is referred as “Lady Superstar” by her fans. She made her Tamil debut in the movie Ayya alongside Sarathkumar and appeared with Superstar Rajinikanth in “Chandramukhi”. Her career doesn’t go well in the middle however she managed to give the great comeback in the movie “Raja Rani” directed by debut director Atlee. “Naanum Rowdy Thaan” has given a great success in her career as well as a perfect better half.

Anushka Shetty is one of the prominent actresses in Tamil cinema who made her Tamil debut in the movie “Rendu” with Madhavan. After that, she joined with Thalapathy in the movie “Vettaikaran” and did multiple projects in the Tamil Cinema. Then, she signed in the box office movie “Bahubali” as lead actress and delivered the extraordinary performance. She is one of the highest paying actresses in South Indian cinema.