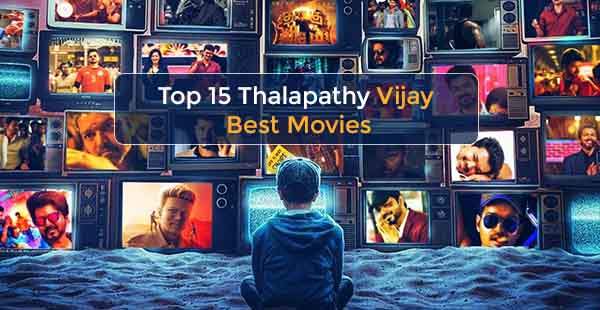 Thalapathy placed a remarkable place in his 25 years of Tamil Cinema. He has done almost 63 movies and most of the movies were blockbuster. Vijay has a huge fan base in Tamil cinema as well as in world cinema. He debuted in the movie “Naalaiya Theerpu” produced by his father S.A. Chandiraseker but it doesn’t go well for Vijay but later given commercial hits such as Love Today, Poove Unakaga, Once More rules the theatre for more than a hundred days. Thulladha Manamum Thullum gives the turning point in his cinema career. Here we go with the Top 15 Vijay best movies.

Poove Unakaaga is the comedy romantic movie released on 15 February 1996 written and directed by Vikraman under the banner Super Good Films. The stars are Sangita, Anju Aravind, Charlie, Nambiar, and Nagesh with a running time of 150 Minutes. The music was composed by S.A. Rajkumar. It is the first blockbuster movie in Vijay’s Career

The romantic drama movie Kadhaluku Mariyathai starred Vijay and Shalini as lead roles. Sivakumar, Srividya, Charle, Manivannan, Radha Ravi in supporting roles. This movie was directed by Fazil released on 19th December 1997 produced by Murugan Cine Arts with a running time of 165 Minutes. The music was done by Ilayaraja.

“Thulladha Manamum Thullum” the breakthrough movie in Vijay’s career was released on 29 January 1999 written and directed by Ezhil under the production of Super Good Films. The stars are Vijay, Simran, Manivannan, Dhamu with the movie length of 150 Minutes. S. A. Rajkumar composed music for this movie.

Kushi is a romantic comedy movie that has a separate fan base for this love story released on 19th May 2000. Vijay joins hands with Jyothika directed by S.J. Suriya under the banner Sri Surya Movies. Mumtaj, Vivek, and Vijayakumar are other lead roles with the movie playtime of 170 Minutes. This movie plays a vital role in his career

The Movie “Friends” is the Epic comedy movie written and directed by Siddique under the production company Swargachitra. Vijay, Suriya, Ramesh Kanna, Vadivelu play the lead roles. This movie was released on 14 January 2001 with a movie-length of 167 Minutes. Ilaiyaraaja composes the music for this movie. Vadivelu’s Nesamani character brings the movie to the next level.

Ghilli is the most memorable movie in his career which helped to develop his fan base from lakhs to crores. The Telugu remake movie Ghilli was released on 17 April 2004 directed by Dharani under the banner of Sri Surya Movies. Vijay, Trisha, Prakash Raj play the lead roles. The running time of the movie is 168 minutes. The music was composed by Vidhyasagar.

Thirupachi is the brother-sister sentimental movie written and directed by Perarasu under the production company “Super Good Films”. Vijay and Trisha play lead roles. Mallika, Livingston, Pasupathy,  Kota Srinivasa Rao play other roles. This movie was released on 14 January 2005 with a length of 178 Minutes.

The movie “Sachin” narrates the college love story and one of the best romantic movies in Tamil starring Vijay and Genelia. The movie was released on 15 April 2005 written and directed by John Mahendran under the production V Creations. Devi Sri Prasad gives the music composition. This movie entertains you for 154 Minutes. Vadivelu, Santhanam, Raguvaran, Bipasha Basu play the supporting roles.

The Hindi movie 3-idiots was dubbed in Tamil as Nanban directed by Shankar and collected 164 crores. Vijay, Jeeva, Srikanth, and Ileana D’Cruz play lead roles with supporting roles from Sathyan and Sathiyaraj. The movie was released on 12 January 2012 with a movie-length of 188 minutes. The music was composed by Harris Jayaraj under the production of Gemini Film Circuit.

Thuppaki is one of blockbuster crossed 100 crores collection in just 10 days by breaking the record of Super Star’s Enthiran movie collection and it is the comeback movie in Vijay’s career after many flops. The movie was released on 13 November 2012 written and directed by A.R. Murugadoss under the banner V creations. The stars are Vijay, Kajal Agarwal, Sathyan, Vidyut Jammwal, and Jayaram with the running time of 170 Minutes. The Background score and music was composed by Harris Jayaraj.

The mass cop movie “Theri” is yet another successful movie for thalapathy directed by Atlee under the banner V creation. The movie was released on 14 April 2016 with a running time of 158 minutes. The music was composed by G.V. Prakash Kumar. Amy Jackson, Samantha Ruth Prabhu, Mahendran, Prabhu, Rajendar, and Raadhika Sarathkumar played the other roles.

The song “Aalaporan Tamizha” also called as “Tamilian anthem” takes place in this movie composed by A.R. Rahman from the Vivek Lyrics. The movie was released on 18 october 2017 with a running time of 169 minutes and hit the box office. Director Atlee directed this movie under the production company Thenandal Studio Limited. The stars are Vijay, Kajal Aggarwal, Samantha, Nithya Menen, S. J. Surya, Vadivelu, Sathyaraj.

Bigil is to empower women and women’s sports. The Women anthem “Singapenney” takes place in this movie with the combination of A.R. Rahman and Lyricist Vivek. The movie was directed by Atlee under the production AGS Entertainment and released on 25 October 2019 with a running time of 178 minutes. The stars are Vijay, Nayanthara, Jackie Shroff, Kathir, Vivek. This is yet another box office movie for Thalapathy Vijay