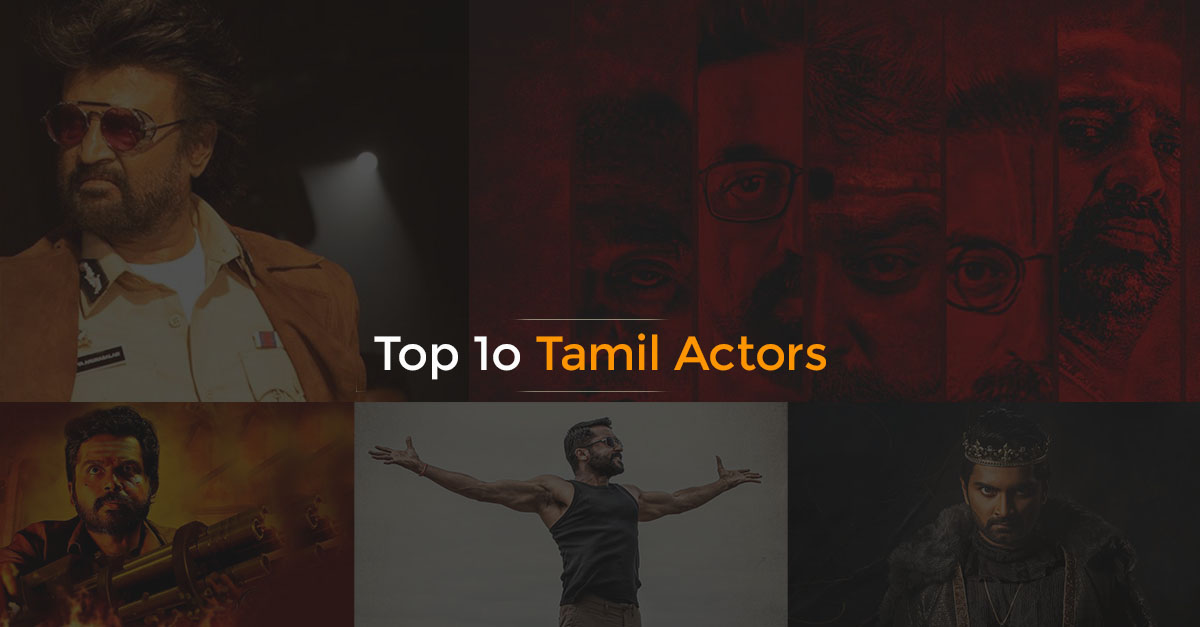 Kollywood cinema contains more number of multi-talented actors who are best in acting, singing, lyrics, etc.., Among the hundreds of heroes, here we pick the Top Actors in Tamil who deserve this place. Here we include their salary, best movies, people’s thoughts, and their best pair.

Top 10 actors in Tamil are in descending order

Atharvaa is a young talented actor who made his debut in the movie “Baana Kaathadi” with Samantha directed by Badri Venkatesh under the banner Sathya Jyothi Films. Atharvaa is the son of Idhaya Murali. He acted in less than 15 movies but young girls have some craze on this guy. He also made his Telugu debut in 2019.

Sivakarthikeyan is one of the rising actors in Tamil cinema. He is the best entertainer who covered the attention of family audiences and children. He started his career in Vijay Television and made his debut in the movie “Marina”. He is also a producer, playback singer, lyricist, and Video Jockey. He played lead roles in 18 movies and many of his movies joined the box office club.

Makkal Selvan is the only actor who can do both hero and negative roles in Tamil cinema. He will be mass in both roles. He is also a rising star who faced lots of struggles and made his debut in the movie “Thenmerku Paruvakaatru” directed by Seenu Ramasamy. He is also a producer, dialogue writer, lyricist and has done more than 30 movies in a short time.

Karthi is well known for his movie selection. He always selects the best movie scripts to entertain his fans. He made his debut in the movie “Paruthiveeran” with Priyamani. Before his acting career, he was assistant director to Mani Ratnam. Kathi is Suriya’s younger brother. He has done more than 20 movies in Tamil cinema.

Jayam Ravi always chooses quality content to entertain his fans. He made his debut in the movie “Jayam” and got great success. The movie Jayam was directed by his own brother Mohan Raja and produced by his father. This movie gives him a title to his name. Jayam Ravi is likely to do more science fiction movies like Tik Tik, Miruthan, etc. He appeared in more than 20 movies.

Dhanush is a multi-talented actor who is also a writer, director, producer, lyricist, screenwriter, and playback singer. He made his debut in the movie “Thulluvadho Ilamai” directed by his father Kasturi Raja. He got more popularity through the song “Why This Kolaveri” written and sung by him under the music composition of Anirudh. He married Superstar Rajinikanth’s daughter Aishwarya.

Chiyaan Vikram is one of the most underrated actors in Tamil Cinema but the fact is he is only an actor with zero haters. His first movie “En Kadhal Kanmani” doesn’t go well however his second movie “Sethu” gives a successful career. He acted in more than 50 movies and still counting

His Featured Movies: I, Irumugan, Sethu, Saamy, Pithamagan and more

Surya is one of the most handsome actors in Tamil cinema with more number of the girls fan base. Before his career, he worked in a garment company. He made his debut in the movie “Nerukku Ner” released in 1997. He also appeared in Televisions as a host in the program “Neengalum Vellalam Oru Kodi” published by Star Vijay. Surya has more interest in social activities. He has done 40 movies as lead roles including Soorarai Potru.

Ulaga Nayagan Kamal Haasan is well known for his acting skills. He started his career in Tamil cinema from his childhood and has done various unimaginable characters. He has done over 200 movies over various languages and still counting. He is also the host of the most familiar television show “Bigg Boss Tamil” published by Star Vijay. He made his lead role on Arangetram directed by K. Balachander.

Ajith Kumar is well known for his mass who is referred to as “Thala” by his fans. He is also a bike racer. He started his cinema career in the movie “Amaravathi” introduced by the singer S.P. Balasubrahamanyam. He has done almost 60 movies and most number of movies with director Siruthai Siva.

Rajinikanth is a well known most stylish actor who has done more than 100 movies in his career and still counting. He was a bus conductor before his career and made his debut in K. Balachander’s movie “Apoorva Raagangal” was released in 1975. He is referred to as “Super Star” by fans. He is the pride of the Tamil Cinema.

Vijay is one of the highest paying actors in Tamil cinema who has the highest fan base familiarly called “Thalapathy” by his fans. He is also a playback singer and dancer. He has done 64 movies including Thalapathy’s Master. His debut movie was “Naalaiya Theerpu” released in 1992 and still growing on.

Actors With Huge Fan Base