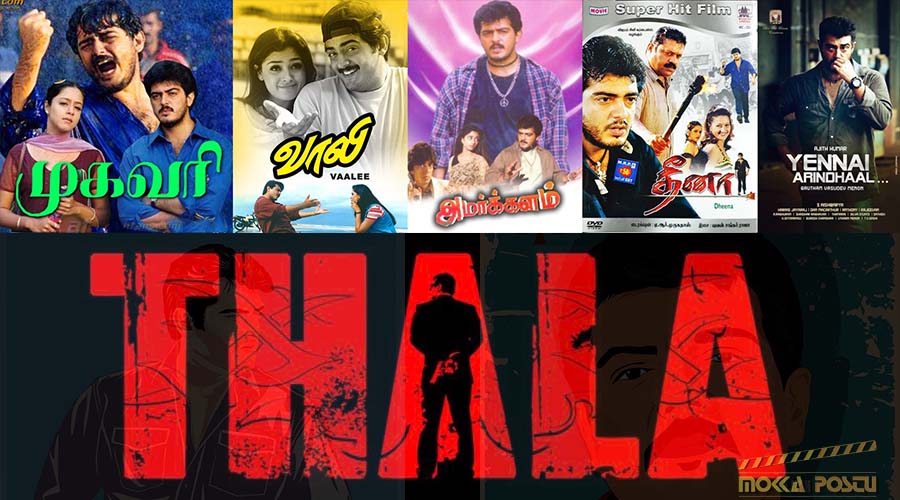 Ajith Kumar is an actor who is working prominently in Tamil cinema and has a huge fanbase. Ajith Kumar was referred to as “Thala” by his fans. Ajith started his career as a romantic hero and Now, he is doing mass movies, commercial movies as well. Thala Ajith Kumar did almost 60 movies including the upcoming movie “Valimai” and most of them were hits. Here we share the list of 15 Ajith movies that make you a fanboy of him.

Director Vasanth’s romantic thriller movie ‘Aasai’ starring Ajith Kumar and debutant Suvalakshmi was released in 1995. The music was done by Deva and the cinematography was handled by Jeeva. This film was on theatre screens for more than 200 days and hit the box office. The story is based on three-person hero “Jeeva”, heroine “Yamuna” and heroine’s brother in law who demands to marry heroine “Yamuna”.
Best Songs of Aasai: Konja Naal Poru, Meenamma Adikalayilum.

Kaadhal Kottai deserves the National Film Award for the best-featured film. It was released on July 12, 1996, with a movie-length of 167 minutes written and directed by Agathiyan under the banner Sivasakthi Movie Makers. Ajith Kumar and Devayani play a lead role. Kaadhal Kottai is about the long-distance relationship between Suriya (Ajith Kumar) and Kamali (Devayani). This is also one of the romantic movies in Tamil.
Best Songs of Kadhal Kottai: Kavalai Padathe Sagothara, Nalam Nalamariya Ava

‘Kadhal Mannan’ is a romantic drama movie released in 1998. The movie was directed by Saran with Ajith Kumar and Maanu as lead actors. The music and background score was composed by Bharathwaj. The cinematography was handled by A. Vijayakumar and produced by V. Sudhir Kumar. Kadhal Mannan helps to re-establish Ajith’s market after some bad movies. This is the love story between a bike mechanic and a girl from a strict family.
Best Songs of Kadhal Mannan: Unnai Paartha Pinbu Naan, Kanni Pengal Nejathil.

‘Amarkalam’ is directed by Saran, starring Ajith Kumar and Shalini in lead roles. The music was composed by Bharadwaj. The romantic action movie was released in 1999 as Ajith Kumar’s 25th movie in his career. Raghuvaran, Raadhika, and Nassar play supporting roles. Amarkalam states the love story of a childhood tortured adolescent and a girl from a family with high authorities.
Best Songs of Amarkalam: Satham Illatha Thanimai Ketten, Unnodu Vazhatha Vazhvenna Vazhvu

‘Vaali’ is a romantic thriller movie starring Ajith Kumar and Simran released in 1999. S.J.Suryah made his debut as a director in this movie. The music was composed by Deva. Ajith received his first Filmfare Award for Best Actor through his performance in this movie. It narrates the story of Twin brothers. One is psychotic and another is sweet.
Best Songs of Vaali: April Maathathil, “Nilavai Konduva”

Kandukondain Kandukondain is one of the best Tamil romantic movies performed by Ajith Kumar, Mamooty, Abbas, Tabu and Aishwarya Rai with director Rajiv Menon under the V creations production. It was released in 2000 with a movie-length of 158 Minutes. The music and background score was done by A.R. Rahman. The Movie states the struggles of the family who lost their father at an unusual time. In this movie, Ajith Kumar also shows off the struggles of directors in the cinema industry.
Best Songs of Kandukondain Kandukondain: Enna Solla Pogirai, Enge Enathu Kavithai

The popular director A.R. Murugadoss was introduced to Tamil cinema through the movie ‘Dheena’ starring Ajith Kumar, Suresh Gopi, and Laila in lead roles. The music for the film was composed by Yuvan Shankar Raja. The movie was released in 2001 and filled up with fight sequences, mass dialogues, and admiring romantic scenes. In other words, Amarkalam is a commercial entertainer movie.
Best Songs of Dheena: Sollamal Thottu Chellum Thendral, Nee Illai Endraal.

‘Citizen’ is a social message movie directed by Saravana Subbaih, starring Ajith Kumar, Meena, Vasundhara Das, and Nagma. The music was composed by Deva. Citizen movie was released in 2001 and got decent reviews. The movie was about revenge on the officials who made the village and people disappear except the child, hero of this movie. The cinematography was handled by Ravi K. Chandran and produced by S. S. Chakravarthy.
Best Songs of Citizen: Merkey Vidhaitha, Pookara Pokhara

‘Villain’ is a sentimental action movie directed by K. S. Ravikumar released in 2002 Diwali competing with Thalapathy’s Bagavathi. Ajith Kumar, Meena, and Kiran Rathod performed in this movie. The music and background score was composed by Vidyasagar and cinematography was handled by Ashok and S. Moorthy. The Villain movie narrates the story of a bus conductor who steals money from big heads and corruptors to help the physically challenged people that also includes his handicapped brother.
Best songs of Villain: Pathinettu Vayathil, Adicha Nethi Adi

The iconic movie ‘Billa’ remains a comeback movie for Thala Ajithkumar released in 2007 after continuous flops. This movie was directed by Vishnuvardhan, starring Nayanthara and Prabhu in lead roles. The music was composed by Yuvan Shankar Raja. It was remade from the Hindi film “Don”. Billa fills with a mass fight sequence of gangsters. Thala plays a dual role in this movie as Billa, a gangster, and Velu, an innocent one. Santhanam joins for comedy scenes. This movie is always at the top of Ajith’s best movies.
Best Songs of Billa: Sei Yedhavathu Sei, Vethalaiya Potendi.

The action thriller movie ‘Mankatha’ is directed by Venkat Prabhu, starring Ajith Kumar, Arjun, and Trisha in lead roles. Yuvan Shankar Raja gives the best music for this film. The film released in 2011 and it is one of the biggest grosser in Tamil film history. The story is all about the robbery from the high profile businessman. The bike stunt scenes are the highlights of this movie. This movie was recorded as the 50th Movie of Thala Ajith. Best Songs of Mankatha: Kannadi Nee Kanjadai Naan, Vaada Bin Laeda

‘Veeram’ is a commercial entertainer movie directed by Siva, Ajith Kumar and Tamannaah in the lead roles, alongside Vidharth, Bala, Santhanam, Nassar, Pradeep Rawat, and Abhinaya are in support roles. The music and background score was composed by Devi Sri Prasad and the cinematography was handled by Vetri. The film was released in 2014 and hit box-office as usual. In this movie, Vinayagam (Ajith Kumar) tries to protect the innocent family from Adalarasu who has personal vengeance on Nallasivam’s family (Koppuram Devi father & family).
Best Songs of Veeram: Nallavannu Solvaanga, Ival Dhaana

One of the classiest movies in Tamil cinema is Ajith Kumar’s ‘Yennai Arindhaal’ directed by Gautham Vasudev Menon. Arun Vijay and Trisha are in lead roles. The music and background score was composed by Harris Jayaraj. The cinematography was handled by Dan Macarthur and produced by S. Aishwarya. The movie was released in 2015, after many postponements and delays. In this movie, Thala Ajith Kumar appeared as a super cop as well as rowdy to watch the moves of smugglers.
Best Songs of Yenna Arindhaal: Unakkenna Venum Sollu, Mazhai Vara Pogudhae,  Adhaaru Adhaaru.

The action movie “Vedalam” was released in 2015. The movie was directed by “Siruthai Siva” with performers Ajith Kumar and Lakshmi Menon as a lead where Shruti Hassan, Rahul Dev, Kabir Duhan Singh and Soori in supporting roles. The music was rocked by Anirudh Ravichander. This movie narrates the transformation of a gangster who tries to protect his adopted sister.
Best Songs of Vedalam: Aaluma Doluma

Thala Ajith Kumar and director Siva joined hands for the fourth time in the movie ‘Viswasam’. Nayanthara, Anika, Vivek, Kovai Sarala are other performers. This sentimental movie was released in 2019. The music and background score was composed by D. Imman and the cinematography was handled by Vetri. The story is all about the Father-Daughter relationship.
Best Songs of Viswasam: Kannaana Kanney, Vaaney Vaaney.