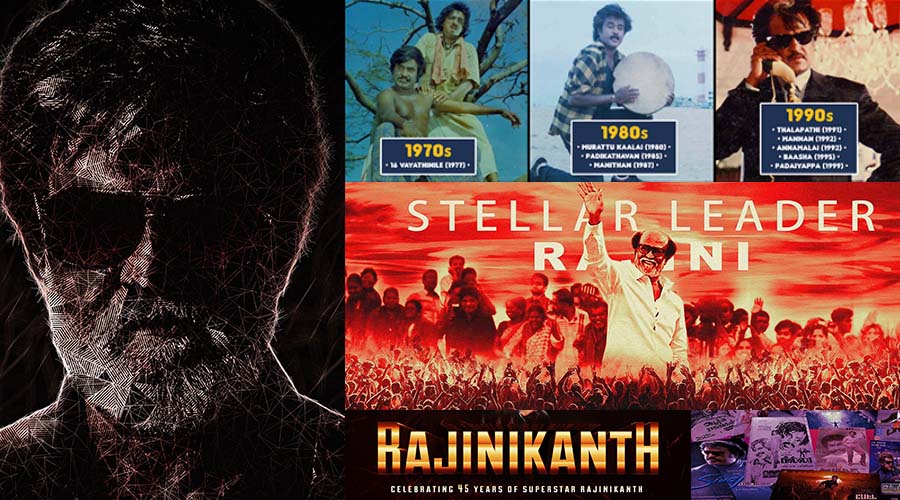 Rajinikanth is a top Indian actor where he started his career as a bus conductor. He is referred to as “Superstar” among world cinema fans. His growth and hard work in the cinema industry were phenomenal and still at the top after 5 decades of success, he is being a role model for many actors and actresses. Rajinikanth acted in more than 180 movies and is still counting. On reviewing those 180 Rajinikanth movies, we have listed the best 15 movies of ‘Superstar Rajinikanth’.

P.Bharathiraja’s ’16 Vayathinile’ made two legends Kamal Haasan and Rajinikanth act together, Where Sridevi, Ganthimathi, Sathyajith and Goundamani are in roles. Ilaiyaraaja focuses on music for this movie and the cinematography was handled by P.S. Nivas. The movie was released in 1977 and describes the struggles and difficulties of a 16-year-old schoolgirl, Mayil (Sridevi).
Best Songs of Pathinaru Vayathinile: Aattu Kutti, Chendura Poove

‘Billa’ movie, directed by R. Krishnamurthy stays as the turning point in Rajinikanth’s career. The thriller action movie was released in 1980 with the performers Rajinikanth, Sripriya, and K. Balaji as a lead. M. S. Viswanathan’s music in this movie is highly appreciated. In this movie, Rajinikanth plays a dual role: the gangster and innocent one. It was again remade in 2007 as Billa, starring Ajith, Nayanthara, and Namitha. Billa stays as one of the best movies of Ajith.
Best Songs of Billa: Vethalaiya Potendi, My Name Is Billa

‘Anbukku Naan Adimai’ is a sentimental movie directed by R. Thyagarajan with the performers Rajinikanth, Vijayan, Surulirajan, Thengai Srinivasan, Asokan, Sundarrajan. Ilaiyaraaja gives music and background music for this movie and the cinematography by V. Ramamoorthy. The movie was simultaneously made in Tamil and Telugu and released in 1980. This movie states the sentimental story of two brothers, police and a thief.
Best Songs of Anbukku Naan Adimai: Kaathodu Poovurasa

The village-based story ‘Murattu Kaalai’ was directed by S. P. Muthuraman and released in 1980. The performers were Rajinikanth, Rati Agnihotri, Sumalatha, and Jaishankar. Ilayaraja made music for this movie and the cinematography was done by Babu. Murattu Kaalai became a major commercial success and established him as a superstar and hero. The movie is about a village story of a wealthy man who tries to be ordinary.
Best Songs of Murattu Kaalai: Pothuvaga En Manasu Thangam, Entha Poovilum

‘Thillu Mullu’ is a comedy-drama movie directed by Rajinikanth’s debutant movie director K. Balachander, starring Rajinikanth, Thengai Srinivasan, Nagesh, Poornam Vishwanathan, Sowcar Janaki, Madhavi, and Viji Chandrasekhar. M. S. Viswanathan composed music and the cinematography was done by B. S. Lokanath. As the film name indicates, he does a dual role in the movie as Chandran and Indran to fake his boss. The movie was released in 1981 and remains as iconic Rajini movies
Best Songs of Thillu Mullu: Thillu Mullu, Raagangal Pathinaaru

Rajinikanth plays dual roles as father and son in the movie ‘Netri Kann’ and was released in 1981. The movie was directed by S. P. Muthuraman under the production of Kavithalayaa Productions. The film stars Rajinikanth, Menaka, Goundamani, Lakshmi and Sarath Babu are in notable roles. As usual, Ilayaraja composed for Rajinikanth movie, and visualization was handled by Babu. Nerikann improved the middle-aged women fan base for Rajinikanth. The story is about successful businessman Chakravarthy and his son.
Best Songs of Netri Kann: Theeratha

‘Moondru Mugam’ is an action movie where Rajinikanth plays three roles as Alex Pandian, Arun, and John. The movie was directed by A. Jagannathan and released in 1982. The film stars Raadhika, Sathyaraj, Senthamarai, Thengai Srinivasan, Silk Smitha, Rajya Lakshmi in other roles. The music was composed by Sankar Ganesh and the cinematography by Viswam Natarajan. Moondru Mugam is about twin brothers avenging the Egambaram who stabs their father.
Best Songs of Moondru Mugam: Naan Seitha Kurumbu

The action drama movie ‘Nallavanukku Nallavan’ was released in 1984 under the banner AVM productions. The movie was directed by S. P. Muthuraman, where the stars are Rajinikanth and Raadhika in lead roles and Karthik, Thulasi, V. K. Ramasamy, Major Sundarrajan, Y. G. Mahendran, Visu in supporting roles. Ilaiyaraaja tuned music for this movie and visual by Babu. The movie is about some complications between the rugged man who turned factory worker later and his late boss son, Vinod.
Best Songs of Nallavanukku Nallavan: Chittuku Chella Chittuku, Unnaithane Thanjam Endru

‘Thalapathi’ is a friendship based story directed by Mani Ratnam under the production house G. V. Films. The movie was released in 1991 and features Rajinikanth and Mammooty in lead roles, alongside Arvind Jaishankar, Amrish Puri, Srividya, Bhanupriya, Shobana and Geetha in supporting roles. Ilayaraja and poet Vaali give the best music and lyrics. The music and background score was composed by Ilaiyaraaja. This movie narrates the bond between Suriya (Rajinikanth) and Deva (Mammooty) inspired by the Mahabharat’s characters Karna and Duryodhana.
Best Songs of Thalapathi: Kaattukuyilu, Rakkamma Kaiya Thattu

‘Annamalai’ is an action drama movie remade from the Bollywood movie “Khudgarz”. The movie was released in 1992 under the direction of Suresh Krishna, with the film stars Rajinikanth, Kushboo in lead roles. Sarath Babu, Radha Ravi, Nizhalgal Ravi, and Manorama are in supporting roles. Deva composed music for this movie and the cinematography was handled by P.S. Prakash. This movie set the trend of introducing heroes with the mass opening song. This movie is about the poor milkman Annamalai and wealthy hotel owner Ashok who have been friends since childhood.
Best Songs of Annamalai: Vanthenda Paalkaran, Kondayil Thaazham Poo

The film stars Rajinikanth and Meena joins for the second time in the movie ‘Eajaman’ after Annamalai. The movie was directed by R. V. Udayakumar. The other performers in this movie were Napoleon, M. N. Nambiar, Manorama, Goundamani, Senthil with the great visuals from Karthik Raja. The highly appreciated music was given by Ilaiyaraaja. This movie is a commercial entertainer that shows the consequences of Vaanavarayan (Rajinikanth) and Vallavarayan (Napoleon). Ejamaan is always in the list of best Rajini Movies.
Best Songs of Ejaman: Aalappol Velappol, Oru Naalum Unnai Maravatha

‘Baasha’ is an action movie directed by Suresh Krishna under the banner Sathya Movies. Rajinikanth and Nagma performed as lead roles with Raghuvaran, Janagaraj, and Vijayakumar in supporting roles. The movie was released in 1995 with the music from Deva and the cinematography was handled by P.S. Prakash. The movie is about the life story gangster who turned into a humble auto driver later. This movie has been on the screen for more than 500 days.
Best Songs of Baashha: Raa Raa Ramaiya song, Naan Autokaaran

‘Muthu’ emerged as a commercial success movie released in 1995 under the banner Kavithalayaa Productions. This action-comedy movie was directed by K.S. Ravikumar, starring Rajinikanth and Meena in lead roles. A. R. Rahman handles music and background score and the cinematography was from Ashok Rajan. Muthu is the story of Zamindar’s son who was brought up as an ordinary man. Later, realized.
Best Songs of Muthu: Oruvan Oruvan, Vidukathaiya

The Drama movie ‘Padayappa’ was released in 1999 and praised by most of the world cinema fans. The movie was directed by K.S. Ravikumar with the legends Sivaji Ganesan, Rajinikanth, Ramya Krishnan, and Soundarya in the lead roles, Where Abbas, Lakshmi, Radha Ravi, and Nassar play supporting roles. Ramya Krishnan’s Neelambari character is well appreciated by the audience. A. R. Rahman gives his best music for this movie. The story shows the clash between benevolent Padayappa and desirous Neelambari.
Best Songs of Padayappa: Minsara Poove Pen Poove, Suthi Suthi Vandhinga

‘Enthiran’ is a high budget science fiction movie directed by S. Shankar under the banner Sun Pictures with the lead stars Rajinikanth and Aishwarya Rai Bachchan. Danny Denzongpa, Santhanam and Karunas are in supporting roles. A. R. Rahman’s music added a special hit to the movie and cinematography from R. Rathnavelu raises Kollywood cinema to the next level. This movie creates an awareness of using Human robots in the real world. Best Songs of Enthiran: Kadhal Anukkal, Kilimanjaro