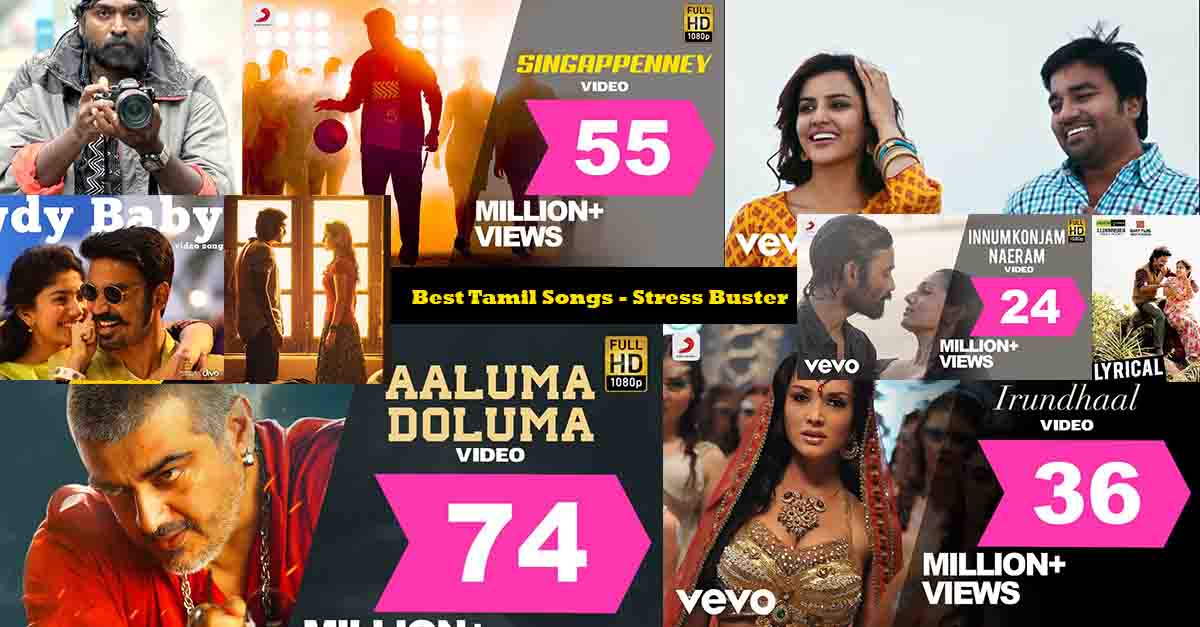 The best Tamil songs that burns out your stress are listed out here. Songs always play a major role for our healing from depression, stress, etc.. Hope you will love this songs and share u favorite songs in the comment if we missed. Thanks in advance!

Kodi Aruvi is one of the best tamil songs that takes place in the movie “Mehandi Circus” directed by Saravana Rajendran under Green Studios and Red Giant Movies. This song was sung byPradeep Kumar and Nithya Shree. Sean Roldan Joins with Lyricist Yugabharathi in this song.

Rowdy Baby has acquired 783 Million youtube video views which are highest among the best Tamil songs composed by Yuvan Shankar Raja, written and sung by Dhanush with Dhee. Dhanush and Sai Pallavi are the lead performers in this song. This song takes place in “Maari-2” directed by Balaji Mohan under Wunderbar Studios.

Kannaana Kannae song was sung by Sean Roldan  for the movie “Naanum Rowdy Dhaan” directed by Vignesh Shivan. The music was composed by Anirudh Ravichander with the lyrics by Vignesh Shivan under the banner Wunderbar Films. Vijay Sethupathi and Nayanthara play the lead roles in this movie.

Theni Kaathoda is one of the best Tamil songs which gives the good visual and hearing experience composed by Anirudh Ravichander with the lyrics from Karky. This song takes place in Vanakkam Chennai directed by Kiruthiga Udhayanidhi under the banner Red Giant Movies starred by Mirchi Siva and Priya Anand. Anirudh Ravichandher and Pragathi gave their voice for this song.

Singapenne is one of the iconic songs for women. This goosebump was created by A.R. Rahman with the music and Vivek with the lyrics under the AGS Productions. Vijay and Nayanthara are the lead roles in Bigil directed by Atlee. A.R. Rahman and Shashaa Tirupati are the owners of voice.

Pondattee song takes place in the movie Golisoda-2 directed by SD. Vijay Milton under the banner Rough Note Productions. Music composition and voice from  Achu with the Lyrics of Mani amudhavan.

Ennodu Nee Irunthal was composed by A.R. Rahman with the lyrics from Kabilan. The song was sung by Sid Sriram and Sunitha Shetty under the banner Aascar Film (P) Ltd. The movie was directed by Shankar. Vikram and Emy Jackson play the lead roles.

Life of Ram is one of the most healing songs among the best tamil songs. This song takes place in the movie “96”directed by C. Prem Kumar under the banner Madras Enterprise. Lyrics were written by Karthik Neetha and sung by Pradeep Kumar. The music was done by Govind Vasantha. Trisha and Vijay Sethupathi play the lead roles.

Aaluma Doluma song takes place in the movie “Vedhalam’ starring Thala Ajith and Shruthi Haasan. This energetic beat song was composed by Rockstar Anirudh with the lyrics from Rokesh.G. Anirudh and Baadsha combination gives the voice for this song. The movie was directed by Siruthai Siva under the banner Sri Sai Ram Creations

Inum Konja Naeram song was composed by legend A.R. Rahman, sung by Vijay Prakash and Shweta Mohan. This song takes place in the movie Mariyan directed by Bharatbala under the banner Aascar Film. Dhanush and Paravthy Menon starred in this movie. The lyrics from kabilan and A.R. Rahman